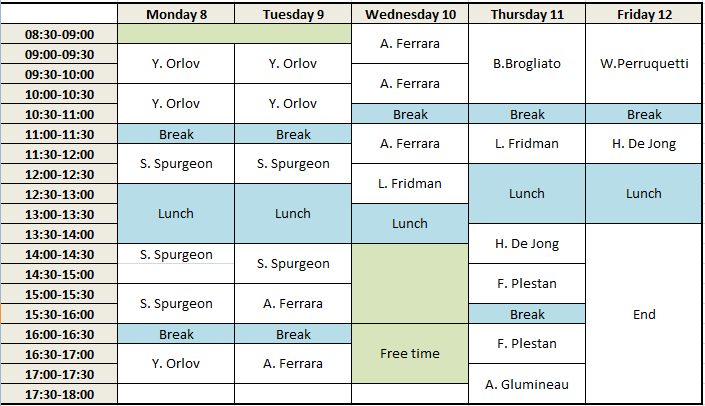 It is known since the works of Galias et al, that an explicit implementation of the discontinuous input (the sign function) yields the unavoidable existence of spurious oscillations (limit-cycles) around the sliing surface. This is named the “numerical chattering”. This yields not only deteriorated precision, but also to highly chattered control input, that often takes the form of a high-frequency bang-bang like controller. Recently, it has been shown theoretically, numerically and experimentally that another type of discretization, known as the implicit discretization, is able to almost suppress the control input and the output numerical chattering, while preserving the precision. The discontinuous, set-valued part of the input, is computed at each step by solving a simple generalized equation, obtained from a nominal system. In this talk we will start describing it in detail on a simple “benchmark” scalar system, then we’ll show how it extends to higher dimensional systems and higher co-dimension sliding surfaces. Both the conventional ESC-SMC and the twisting methods have been tested experimentally with an implicit method on electro-pnematic and inverted pendulum systems. Experimental data nicely confirm theoretical and numerical predictions.

Gene regulatory networks control the response of living cells to changes in their environment. A class  of piecewise-linear (PWL) models, which capture the switch-like interactions between genes by means of step functions, has been found useful for describing the dynamics of gene regulatory networks. The step functions lead to discontinuities in the right-hand side of the differential equations. This has motivated extensions of the PWL models based on differential inclusions and Filippov solutions. I will present some mathematical properties of the PWL models as well as numerical simulation methods based on the reformulation of the PWL models as mixed complementarity systems. The application of this framework will be illustrated by examples of the analysis and control of gene regulatory networks in bacteria.

In the past years an extensive literature has been devoted to the developments of sliding mode control theory. This kind of methodology offers a number of benefits, the major of which is its robustness versus a significant class of parameter uncertainties and disturbances. Yet, it presents a crucial drawback, the so-called chattering phenomenon due to the high frequency switching of the control signal, which may disrupt or damage actuators, thus limiting the actual applicability of this interesting control approach. The aim of this lecture is to provide an overview of the theoretical developments oriented to improve the performance and enlarge the applicability scope of sliding mode controllers by means of chattering alleviation. Specifically, optimization-based second order and higher order sliding mode control algorithms will be presented and discussed. In order to confirm the fact that, with the proposed advances, sliding mode control theory actually becomes usable in practice, some applications of robotic and automotive nature, developed at the University of Pavia, will be illustrated.

Sliding mode controllers are long-recognized for their robustness features against plant uncertainties and unmodeled dynamics. Due to the simplicity of their implementation, these controllers are widely used in practice.  Recently, the interest emerged to extensions of these algorithms to infinite-dimensional plants. First applications to distributed parameter and time-delay  systems corroborated their utility for infinite-dimensional systems as well.  Motivated by modern control applications, standard first- and second-order sliding mode control algorithms  are presented and their attractive features are discussed in finite- and infinite-dimensional settings side by side. The development focuses on the algorithm convergence, closed-loop stability, and implementation issues. The theory is illustrated by numerous applications, involving bipedal robots, heat transfer processes, chemical reactors, and Tokamak plasma, among others.

In order to simplify the control design, adaptation laws of the control gain have been introduced since some years for sliding mode control, the main advantages being chattering reduction and limited knowledge of perturbations and uncertainties. The talk will display several approaches of adaptive first, second and high order sliding mode control, and will show their applicability through experimental results.

Historically the sliding mode technique developed as a robust control method being characterised by a suite of feedback control laws and a decision rule. The decision rule, termed the switching function, has as its input some measure of the current system behaviour and produces as an output the particular feedback controller which should be used at that instant in time. The concept of sliding mode observers came later. These observers have unique properties, in that the ability to generate the so-called sliding motion on the error between the measured plant output and the output of the observer ensures that a sliding mode observer produces a set of state estimates that are precisely commensurate with the actual output of the plant. It is also the case that analysis of the average value of the applied observer injection signal, the so-called equivalent injection signal, contains useful information about the mismatch between the model used to define the observer and the actual plant. These unique properties, coupled with the fact that the discontinuous injection signals which were perceived as problematic for many control applications have no disadvantages for software-based observer frameworks, have generated a ground swell of interest in sliding mode observer methods in recent years. Presentations will provide an overview of both linear and non-linear sliding mode observer paradigms. The use of the equivalent injection signal in problems relating to fault detection and condition monitoring will be demonstrated. A number of application specific results will be described.

Apply sliding mode control on experimental test bench leave to specific problem that this presentation should explain. We will try to gives some answers to the following questions. How to design the system to obtain easier the proof of stability? How to choose the model of control synthesis to respect the physical laws and to not increase the characteristic index? How to decrease the chattering phenomenon without increase the complexity of the algorithm of the control law? How to tune the different gains proposed by different sliding mode strategies to answer to the specifications? All these answers will be given in regards of experience obtain of different benchmark obtains on different mechatronics test bench. Some focus will be given in electro pneumatic and electro hydraulic fields.

The goal of this talk is twofold: – presents some tools around the homogeneity concepts, – explains how such tools are usefull for design and analysis of Sliding Mode Control.

In the first part, we will briefly introduce the main ingredient: Homogeneity (mainly for ordinary differential equations (ODE). Homogeneity is the property whereby objects such as functions or vector fields are scaled in a consistent fashion with respect to an operation called a dilation. Homogeneity presents many features: it can be easily checked (algebraic test), state rescaling does not change the system behavior and “local=global” in some sense because of this scaling property. Thus many concepts which are using solutions of dynamical systems can be dealt with using homogeneity theory. For example stability analysis, finite time stability (FTS), systems approximation, controllability analysis, stabilization, observer design, just to mention a few. We will first recall definitions and properties of homogenity for ODE then we will see how to generalize homogeneity for differential inclusions (and other classes of dynamical systems). We will stress the role of homogeneity in obtaining FTS and some robustness results (involving FT input-to-state stability concepts). The second part will put in light some results about analysis and design of SMC using homogeneity.

The goal of the software is to design a toolbox to synthesize controllers and to simulate the closed-loop system.

The Sliding mode control (SMC) is a powerful and robust control method by forcing the system dynamics to slide on a desired manifold (Sliding surface) in order to robustly follow a given trajectory. Due to the computations complexity, using symbolic languages as SymPy language (a Python library for symbolic computation) is powerful to the analysis of nonlinear systems and to their control design.

Here, the SymPy language is used to develop a sliding mode symbolic software package based on a previous software: NOLIACPA (IRCCyN software). The systematic computation of the structure of the nonlinear system to control, and the feedback laws designed with this package allow its use for education and control engineering purposes.

This package allows the analysis and control design of standard nonlinear systems. The procedures in this package allow computing invariant integers that characterize the fundamental structure of a nonlinear system. These results are then used for exact decoupling and exact input-output linearization (nominal system). Because in the real case, the system includes uncertainties, it has been focused on the control of uncertain dynamical non-linear systems that sustain parameter variations. The Sliding Mode of order one can then be applied to robustify the control law

The package is extended to include High Order Sliding Mode (HOSM) controllers, in order to reduce the phenomenon of chattering and to improve the robustness.

Moreover, to facilitate the use of the CHASLIM package, a graphical user Interface has been developed.

The spring school is funded by